Who invented knitting? Was it a sage or a shaman who one day picked up two sticks, some string, and began the incredible act of knitting? Was this ancient genius filled with divine inspiration or dark magic? Could it have been a lucky accident?

When I began researching the history of knitting, I expected legends and myths and maybe a few charming fairy tales. What fun it would be to discover Rumpelstiltskin-like stories about maidens in dire straits, knitting late into the night!

I had good reason to expect this. After all, the ancient and similar craft of weaving is central to dozens of myths and legends. Take, for example, Penelope from Homer’s Odyssey. While her husband Odysseus was off fighting the Trojan War, she fended off lovestruck suitors with a bargain: she would choose a new husband when she finished weaving a shroud. She then wove the shroud by day and undid it by night, delaying her answer until Odysseus finally returned.

Or consider the mortal Arachne, who challenged the goddess Athena to a weaving dual (weave-off?). Being mortal, she was no challenge at all and lost. The shame was so unbearable that Arachne hung herself. But that’s not the end. Athena pitied her and brought her back to life – but not as a mortal, but a spider so that Arachne would spend the rest of her life weaving. Ouch.

See what I mean about great tales? What stories would knitting’s origins reveal?

A Puzzle with Missing Pieces

Despite high hopes, my research revealed neither mortals nor gods. Instead, knitting’s history is made up of an assortment of clues, competing theories from scholars and half-rotted fragments on the verge of disintegration. Not exactly the fun romp through fairy tales I was hoping for.

Unlike spinning or weaving, knitting doesn’t figure in any ancient myths. In fact, there isn’t even an ancient Greek or Latin word for knitting! The word “to knit” didn’t make an appearance in the Oxford Unabridged English Dictionary until the fifteenth century and wasn’t part of any European language until the Renaissance. All this confirms that knitting is a relatively new invention.

So, if knitting doesn’t have an ancient pedigree, when did it appear on the scene? This is a hard question because many of the earliest knitted garments have disappeared. The reason for this is simple: early knitting was made from natural fibers like cotton, silk and wool – fibers that decompose easily. With few existing fragments, the picture of knitting’s origins becomes fuzzy, a puzzle with missing pieces.

Would the Real Knitting Please Stand Up?

Add to this mix a slippery imposter in the form of nålbinding and we have a truly complicated case. Nålbinding is a needlecraft that produces a fabric that looks like knitting and acts like knitting but, on closer inspection, is not knitting.

Whereas knitting uses two needles to make loops within loops with string, nålbinding uses one needle to splice and knot string together – a process more akin to sewing. However, both knitting and nalbinding produce near-identical looking fabric. In a police lineup, you’d be hard-pressed to pick out knitting from nålbinding.

In fact, nålbinding even managed to dupe scholars. It was years before anyone realized that what had been celebrated as the first piece of knitting – a fragment from Dura-Europos, Syria – was not knitting at all but nålbinding!

The reason the two are so similar is because knitting may have grown out of nålbinding. At some point, a nålbinder might have introduced a second needle into the work and played around until the nålbinding evolved into knitting. It could have happened, but with so little evidence, we can’t know for sure.

Now, that we’ve looked at these impressive nålbinded counterfeits, let’s check out the real deal. The first genuine knitted pieces are from Egypt, circa 1000-1400 AD (much later than the nålbinded garments). They include some colorful fragments and intricate socks (sometimes called Coptic socks) knit in white and indigo cotton.

Even though these socks are the earliest knitted remains we have, becaues of their complexity, they probably aren’t the first knitted garments in history. As Julie Theaker over at Knitty puts it, “Would YOU do stranded-color socks as your first project, particularly if you were making it up as you went and had no one to teach you?” Touché

So, let’s take stock. This is a reasonable, if scant, conclusion about knitting’s origins: knitting began in or around Egypt at around 1000AD and possibly grew out of nålbinding.

Yup. That’s it. Hardly conclusive and waffly as heck, but better than nothing, right?

Unfortunately for us, the particulars of knitting’s origins are lost to history. But once knitting makes its way into Europe, things really start to pick up. The Virgin Mary gets involved, guilds form, and some seriously ballin’ gloves are made for the Catholic Church.

That’s all in Part 2 of The History of Knitting! 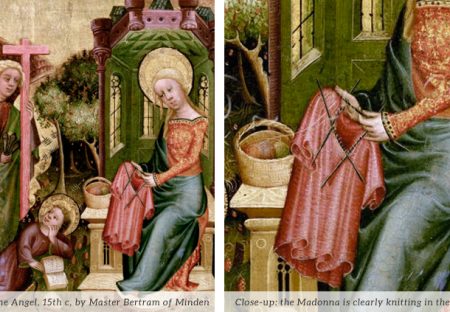 The History of Knitting Pt 2: Madonnas, Stockings and Guilds, Oh My! 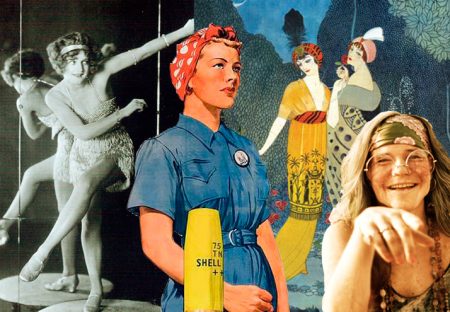 The History of the Headband Pt 1: From Wreaths to WOWs

Hello muggles! I’m so tickled to present a Harry

Meet your new summer challenge: a pair of adorable

This week a hot little tutorial on fingerless glov

This infinity scarf is perfect for beginners since

Hi friends! 👋 I’m so excited to announce that

I love this gorgeous hat, knit from a pattern I de