Oh, nothing to see here. Just the single most elegant, universally beloved and objectively beautiful actress of the twentieth century knitting with red yarn like it ain’t no thing.

In this wonderful film, Audrey Hepburn plays Holly Golightly, a glamorous, eccentric New York party girl. Holly is beautiful and charming and she knows it. She’s got her pick of suitors and she’s not shy about her gold-digging ambitions. Even though most men are “super rats,” she doesn’t care as long as they’re also super rich.

Then, one day a man with boyish good looks and a kind face moves into her apartment. His name is Paul Varjak and he’s a writer with a writer’s salary (which is to say none at all). This being a romantic comedy, the two become friends, get into fun hijinks, discover dark secrets from their past, argue, grow apart, and eventually reunite.

This isn’t exactly a spoiler as it’s the template for pretty much all rom-coms. But the thing about Breakfast at Tiffany’s is that, like its protagonist, it just charms your pants off! It’s impossible not to fall in love with Audrey Hepburn just as it’s impossible not to root for her and Paul to find true love together – money be damned!

[Sidenote: Don’t you love the voiceover in the trailer? “AUDREY HEPBURN AND GEORGE PEPPARD SEARCHING FOR LOVE IN THE BIG TOWN!” So charmingly old school.]

Where Does Knitting Appear?

Okay, so let’s talk knitting! After Paul tells Holly that he loves her and she dismisses him, the two stay apart for awhile. Then, after they’ve cooled off, Holly invites Paul over to her apartment. She’s met a super rich Brazilian named José da Silva Pereira, and the two are dating. Holly’s learning Portuguese, presumably because she’ll soon be married to him and playing the role of wealthy trophy wife. When Paul arrives, she’s knitting this wonderful tomato-red something-or-other. Watch:

Shall we diagnose the Meaning of Knitting together? What role is it playing in this scene? The director could have chosen any assortment of things for Holly to do when Paul arrives. Why knitting?

Okay, my take: When you’re going through a hard time, sometimes you start a new project to take your mind off of things. Maybe you decide to redecorate the house, learn a new language or take up woodworking. You keep busy so you don’t have to think about the tough stuff. In this scene, Holly has invited Paul over to reunite, to be friends, even though she’s dating the Super Rich Brazilian José. It’s an emotionally sticky situation. So what does she do? She learns to knit! To distract herself from the fact that she’s throwing away True Love for Money.

Your turn! What is the Meaning of Knitting?

Lastly, This Movie’s Got Some Great Looking Scenes! Some favourites: 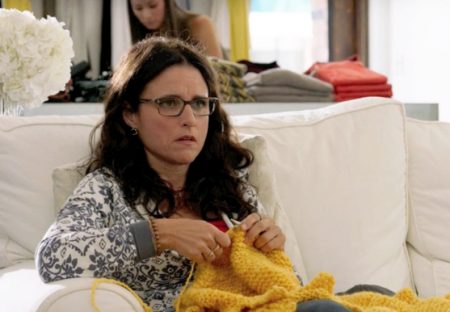 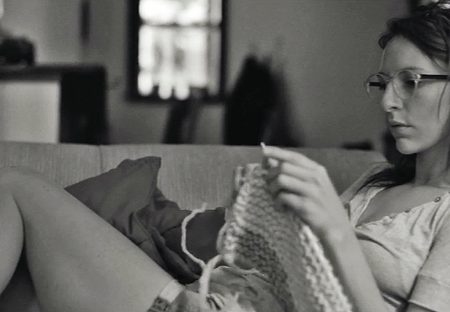 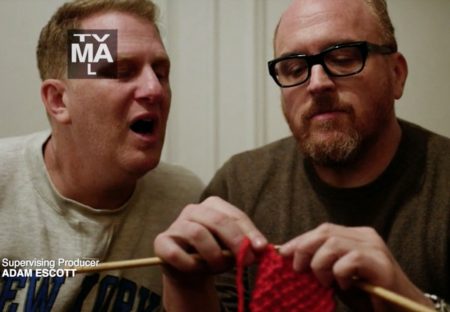