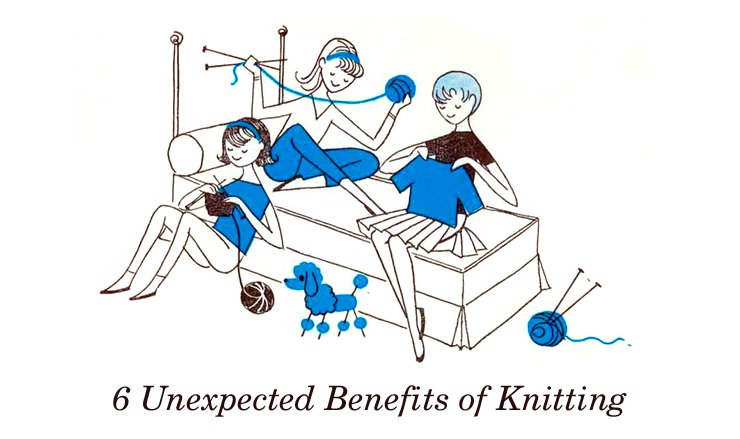 In addition to being fun and creative, knitting has health benefits. It reduces stress, jumpstarts literacy, and reforms inmates. Studies show that knitting can even keep Alzheimer’s at bay!

Who would’ve thought that this seemingly innocuous craft also moonlights in health, education and wellness? Let’s investigate the health benefits of knitting, shall we?

The repetitive and rhythmic motions that make up knitting could be the key to relaxation. Dr Barry Jacobs of Princetown University found that animals who perform repetitive motions trigger a release of serotonin, the neurotransmitter associated with calmness and well-being.

This could explain why most devoted knitters swear by knitting as a de-stresser: doing it may cause a spurt of serotonin!

For English physiotherapist Betsan Corkhill, she saw the positive results of knitting in her patients.

Those who had been sluggish, stressed and depressed were able to soothe themselves through knitting. The more they knitted, the less worried and fearful they became.

“The rhythmic repetitive movements induce a form of meditation similar to mindfulness – that pleasant state of mind when you’re existing ‘in the moment’, not mulling over the past or fretting about the future” said Corkhill. “Knitters find they can ‘zone out’ – and escape into the sanctuary of a quiet mind” [The Daily Mail]

For Corkhill’s patients, knitting was a way to self-manage destructive thoughts and behaviours, which could explain this awesome bag:

At the alternative Waldorf School, first-graders learn how to knit before they learn to read! According to WBEZ:

“The process of knitting is like threading a story. Kids are learning focus and concentration. They’re gaining fine-motor skills, needed for writing. They’re seeing patterns. They’re moving from left to right, the same way you read. They’re gaining confidence.”

The Waldorf School has been incorporating handicrafts like knitting and weaving into its curriculum since its inception in 1919. To this day, knitting is part of the curriculum.

3. Knitting Can Keep Alzheimer’s at Bay

Mental exercises like playing board games, reading and knitting can lower the risk of dementia according to a study by the New England Journal of Medicine and the Mayo Clinic. 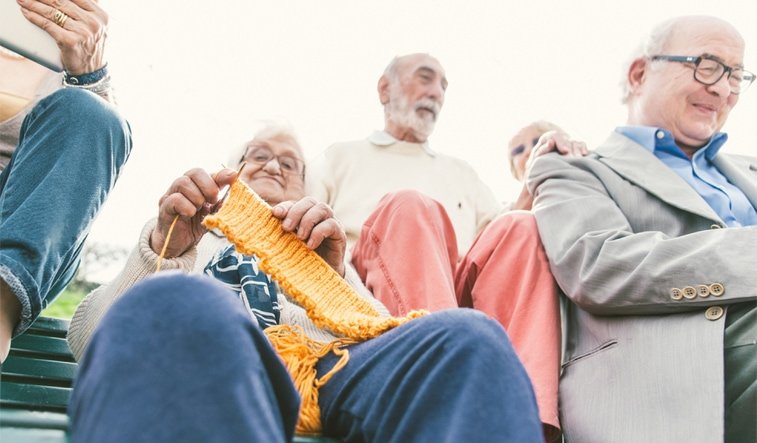 Although inconclusive, researchers believe that activities that stimulate the mind can create networks of connections between brain cells.

If some of these connections break down, the theory goes, others will take over. No damage done!

Lynn Zwerling, along with her friend, Sheila Rovelstad, started Knitting Behind Bars in 2009. It’s a program that teaches knitting to inmates in a minimum security prison in Maryland.

So far, the program has been a resounding success with an eager and growing wait list. To date, over 400 inmates have gone through their weekly knitting class.

Why did Zwerling start Knitting Behind Bars?

“I thought I could give a calming influence to people who really need this,” said Zwerling. “I thought what it takes to do knitting are skills vital to human existence — setting goals, completing a project, giving to somebody else…And I thought, maybe when they get back in the world, these men might choose to be calm and do something worthwhile.” [Baltimore Sun]

No one was more surprised with the results than Margaret M. Chippendale, the prison’s warden and resident skeptic.

She noticed lower rates of violence among the men who knit. “It’s very positive because you can see when you go into the room, the dynamics of their conversation; very calm, very soothing,” she says. “It radiates even when they leave the room and go out into the institution.”

[The most adorable part of this video, among many adorable moments: some inmates are peer-pressured to attend the knitting class!]

In the weekly class, men knit comfort dolls for traumatised children and hats for themselves, their own children and loved ones. It’s a chance to socialise, open up and forget about troubles.

For former inmate Richy Horton, knitting was the only peace he found in prison.

“People can’t really understand [that in prison] you’re completely separated from anything normal or real in the world,” he said. “You’re always told what to do and when to do it, so to have people come in and treat you like a human being means so much. [Zwerling and Rovelstad] came in and they were like my mom.” [Good]

Today, Knitting Behind Bars is still going strong. Check out their blog here.

The irony is that knitting itself is addictive, but the key is in swapping a truly self-destructive addiction for the relatively tame addiction of knitting.

Knitting support groups like this one in Massachusetts and Australia’s Knit to Quit group for smokers have been life-changing, largely because of the community support and knitting’s inherently soothing quality (see #1).

For these knitters, the health benefit of knitting is truly transformative. 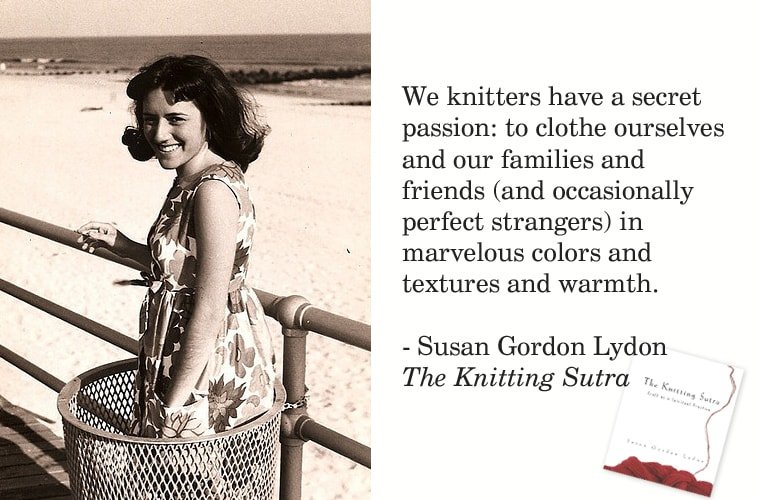 Perhaps the most high profile addict-turned-knitter was Susan Gordon Lydon.

One of the founders of Rolling Stone magazine and a luminary of the women’s movement, Lydon became addicted to heroin in later life and found healing through knitting.

Her meditations on the craft are collected in her book The Knitting Sutra: Craft as a Spiritual Practice and the follow-up, published a year before her death in 2005, Knitting Heaven and Earth: Healing the Heart with Craft.

Both books are pretty awesome.

From knitting circles to Ravelry (aka. Facebook for knitters) to local Stitch ‘n Bitchs and Knitting Behind Bars, no knitter is an island.

Today, as in ancient times, knitting is more social than ever, and everyone seems to love it.

A study published by the British Journal of Occupational Therapy reports that knitters who knit frequently are calm, happy and experience higher cognitive functioning. Win-win!

Have you experienced any of these health benefits of knitting? Let me know what you get out of knitting. I’d love to hear it! 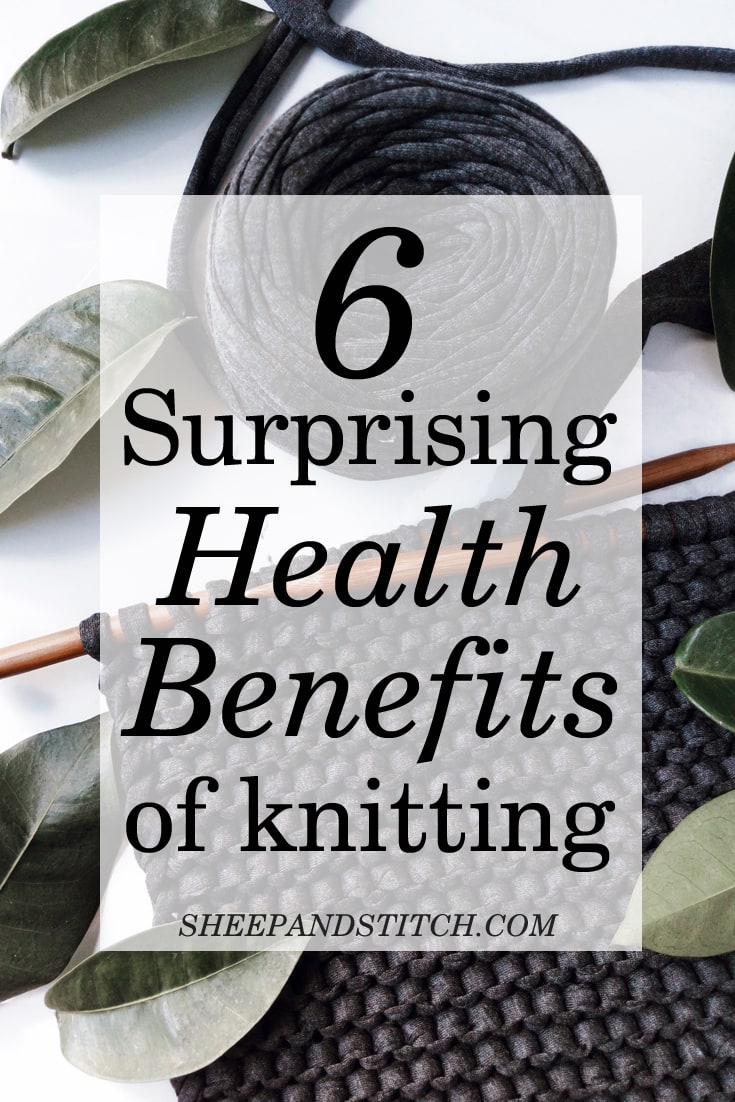