The long tail cast on is a great all-purpose cast on. It’s stretchy and has a neat knitted edge.

Because it’s generally good for all knitting projects, use the long tail cast on as your default cast on. It won’t fail you. But it can be a bit tricky to do at first.

So, follow the video tutorial and take it slow: clamp down, make a diamond, touch your thumb. (These terms only make sense after you watch the video!).

If you’re new to knitting, you might want a refresher on how to make a slip knot. If this traditional method is too un-wieldy and weird for you, check out the Long Tail Cast On (Thumb Method), which some say is easier for beginners.

Both the traditional and thumb method will result in the long tail cast on. They’re just two different ways to get there.

And that’s the long tail cast on! I recommend watching the video a few times and using the photo tutorial as a reminder. Take it slow and expect to make mistakes.

It took me a dozen tries until my hands and brain finally got this cast on, so don’t worry if it doesn’t click right away!

And remember: if you’re having a hard time mastering this cast on, try the Long tail cast on (thumb method), which is easier for beginners.

I’ve made a detailed guide for new knitters! It covers the very basics: cast on, knit stitch and cast off. These three techniques are the backbone of knitting. Master them, and you’re officially a knitter. Check out the guide by clicking the image above! 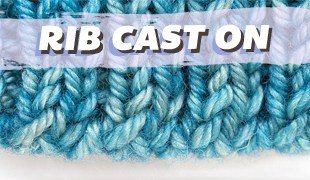 Alternating Cable Cast On for Ribbing 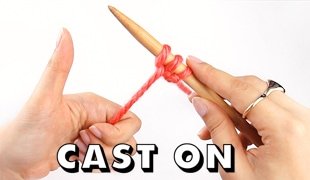 How to Cast On for Total Beginners